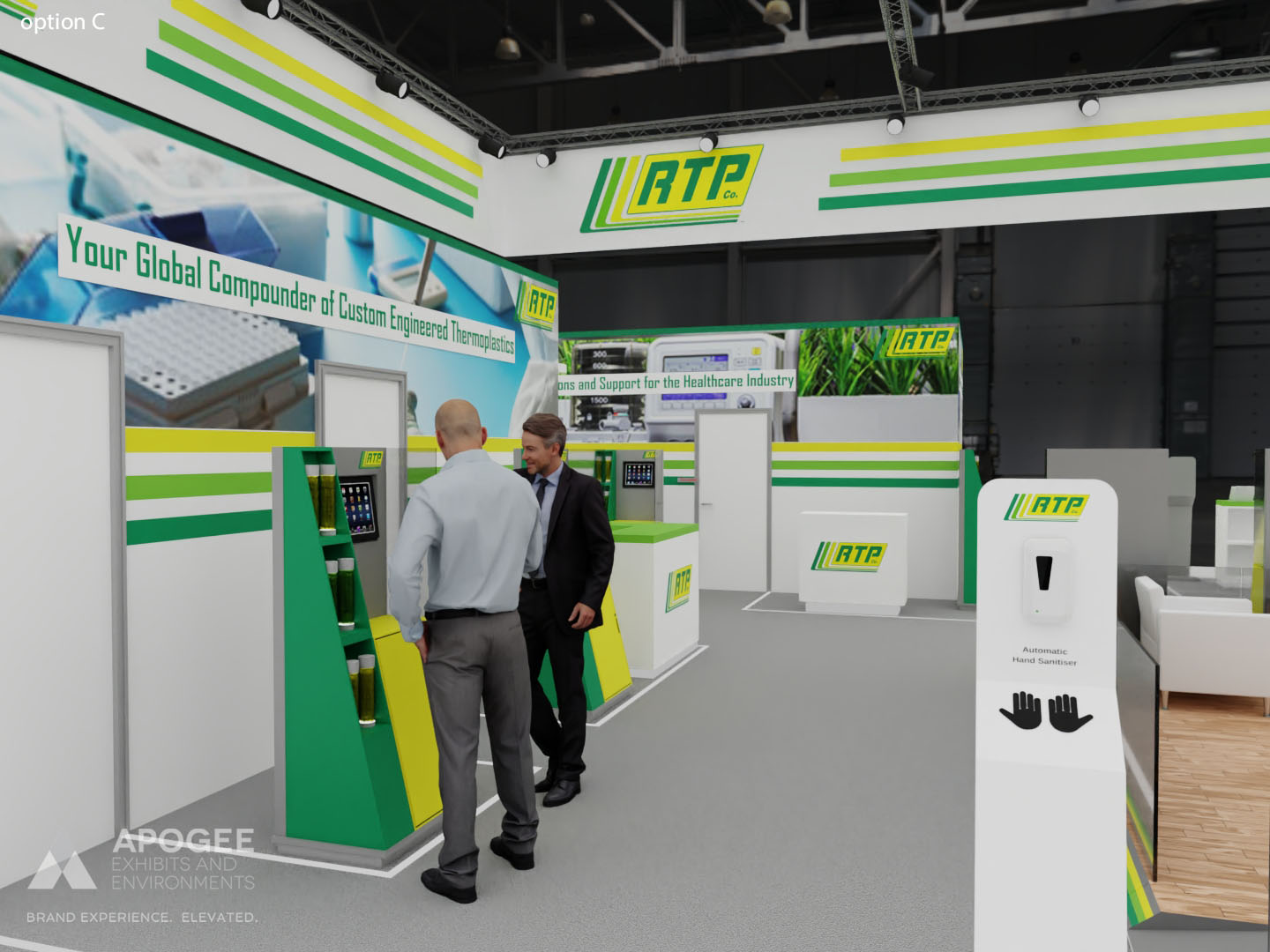 We were pleased to be able to partner with Vail Marketing Communications on this article.  Jessica Vail, and Mark Taylor from Apogee collaborated on this publication to help Exhibit managers navigate the virtual space questions that have arisen as a result of the large-scale cancellation of all live-events in 2020.

With the recent cancellation of all in-person networking events and tradeshows, many companies are looking for a valid alternative.  While we strongly feel that few things can replace face-to-face interaction, having a virtual tradeshow is a close second.  There are many benefits to hosting a virtual event.  With a virtual booth, you can record and track information and analytics like never before.  You will be able to have longer exposure and increase your pre and post event marketing efforts, using the virtual exhibit as a supplement to in-person events, which could lead to more sales!

So, what are the Corporate Exhibit mangers saying?

When the traditional tradeshow does return, we can expect certain restrictions and changes.  There may be reduced attendance by choice or due to local government restrictions.  Tradeshow organizers may go to Morning and Afternoon “shifts” to keep in line with capacity restrictions.  Also, having temperature scanning and hand sanitizing stations throughout the tradeshow venue might become the new normal to monitor attendees, refuse entry to people who are sick and to keep a level of cleanliness throughout the program.  Strict disinfection protocols will need to be followed such as the recent GBAC Star Facility Accreditation (https://gbac.issa.com/issa-gbac-star-facility-accreditation/)

With these anticipated restrictions and theoretically less booth traffic, it is imperative to have a virtual presence as well.

When tradeshows come back to life, there may be a desire for online events and more online exposure to supplement these smaller, in-person events.  The pre and post show marketing is going to be more prevalent than ever with this feature.  Virtual events and booth spaces can be implemented to further promote a presence prior to, during, and after an event.

Your booth is more accessible & you won’t miss a beat

With the traditional tradeshow, your booth is only visible for a few hours or days while the expo hall is open.  Now, with the implementation of a virtual tradeshow and virtual booth, your company information and interaction can be accessible long before or after the event.  In addition, if someone is unable to attend the show, they can still gain access to your company information and representatives.

First, the main priority before launching a virtual exhibit or event is to identify and build your audience, determine your objective and gather an inventory of assets and materials, such as brochures, typically distributed at events and conferences.

When replacing an in-person event with a “distributed experience,” it is important to build and promote to your audience with advance marketing tactics that may include email blasts, social media promotions, print and digital ads, Geo-targeted advertising or even personalized invitations sent by traditional mail.

Get your audience’s attention through the same channels you have always used but consider new methods.  You can generate email blasts that link to registration landing pages, create a give-away campaign such as is shown in the example here:

Geofencing is the practice of using mobile device Global Positioning systems (GPS) to to define a geographic area or the actual physical location of a business, hotel, convention center, or other location that you may want to target users via advertising, text messages, and other promotions.Geofencing is another way to create awareness.  This can be used in advance of a live event as well.  Geofencing captures the GPS coordinates of your targeted audience that may have been physically present at an event or venue and will show them ads designed by you to help drive traffic to your booth, or to your virtual event.

Here is an example of a geotargeted campaign for Colleges and Universities for example:

Once this virtual barrier is established users who enter those spaces who have opted in to receive notifications and advertisements, may then be targeted to specific advertisements you have created.  Some of these could include a promotion to visit a website, or your physical booth if a trade show is convening in that location, and so forth.  The custom tailored ad you create can then provide information that informs you exactly when a consumer or prospect clicked your ad.

Next, it is imperative to create a marketing strategy outline to help you navigate how this virtual event will work, how you will promote your company and most importantly what problems you will solve for your client base.

How will you reach your audience?
It is crucial to come up with an outreach method to promote the event and get your audience excited to sign up.  Sometimes including an incentive such as a free offer, reduced price of a service or a prize at the tradeshow will get people to sign up and stop by your booth.  You may use an email blast to reach your client list, combined with an accompanying social media post.  If possible, see if you can receive a pre-show attendee list from the tradeshow management company – this way you can target those who have already signed up and may already have an interest in your product/service.

How will you keep your audience engaged during the event?
With a traditional tradeshow, it helps to have interesting trinkets and giveaways to entice people to stop by your booth, even if it’s just to grab a free pen.  However, with a virtual tradeshow booth, you need to think outside the box.  Maybe have a video demo to show the value of your product or service to the visitor.  Really focus on what solution you will provide.  You also want to keep it light to build rapport, so maybe have an interactive game or contest as well.

Will you feature live or pre-recorded demos/videos?
If so, it is important to be sure you have the bandwidth to handle development and execution of it.  You also want to make sure the video content is short and to the point.  You can have longer versions on hand for those who are really interested but for the purpose of grabbing attention and viewers in a virtual tradeshow, you want them to be concise and to the point.

Another upside to the virtual booth is being able to track your booth traffic and report different metrics.  You will know who attended, how they interacted in your space, what they downloaded and how long they stayed.  These analytics will be important to measure after your virtual page and event has launched.  Google analytics can only tell part of the story.  You should explore a robust platform that will provide further Marketing Automation reporting of your site visitors activity and information.

What type of campaign will you be hosting?  How long will it live in cyberspace?  Does it need to be distributed in multiple time-zones?  These are all important questions to ask.   There are several ways to create a distributed or live experience.  One such method may be a webinar-based platform where there is an interactive keynote, distributed side-by side- along with a virtual space that users can navigate while they work their way through the event agenda.  Platforms such as ON24 or Streampoint, for example, provide a great customized way to host both a live (or pre-recorded live) presentation, along with an environment that a user can virtually “walk through” as well.

The length of time your content exists is also important.  Some platforms limit their hosting to just a few weeks.  It’s important to identify how long your presentation will be hosted for future access or use.  No one wants to visit a dead link!  Lastly, another important item is knowing from where your presentation will be viewed.  Are your prospects and clients dispersed in several time zones?  If so, the timing of your presentation should be consistent with the common work times in those zones so your audience can participate in its greatest numbers.  If you’re doing a live presentation this is very important.  If you plan to re-distribute to multiple time zones, you can consider a pre-recorded live version that can be viewed at various times.

Partnering with the right team can make your virtual tradeshow a massive success.  If you want to host a virtual tradeshow and don’t know where to start, contact Mark Taylor today to help you get your platform and virtual booth set up.   mtaylor@apogeenow.com